The Ultramarines Pack adds the iconic Space Marine chapter to Warhammer® 40,000®: Dawn of War® II: Retribution™ with eight unique models for the major multiplayer units as well as new color schemes for the others. The Force Commander is replaced by a Ultramarines Captain complete with roman style helmet and Ultramarines livery, the Tactical Marine squad all sport the iconic Ultramarines white helms and livery. The Dreadnought is decorated with a banner displaying the corpse of a Tyranid creature. Additionally, the Scout Squad, Assault Marine Squad and Terminators all receive similar chapter-specific revisions. The Space Marine vehicles also get a visual makeover with this DLC pack, adding custom designs and emblems to differentiate them from the standard vehicles. 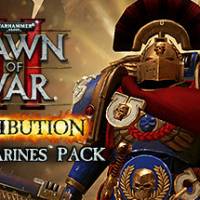